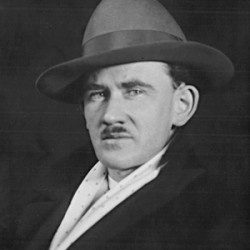 In 1926 the Group of Seven consisted of only six, following the withdrawal of Frank Johnston.

The group turned to Casson in order to re-authenticate its name.

Alfred Joseph  was born in Toronto to a family of grocers.

1917                     Casson executed his first linocut, which according to Dennis Reid was the first block print produced in Toronto. Casson continued to produce linocuts
up to 1920,  exhibiting them with the Society of Canadian Painter-Etchers and the Canadian Society of Graphic Arts.

Age 27                 During the 1920s, Casson continued to paint during his spare time alone and with the Group of Seven. Alfred enjoyed watercolour and in 1925 along with
Carmichael and F.H. Brigden, founded the Canadian Society of Painters in Watercolour.

Age 28                 After Frank Johnston left AJ was invited by Carmichael to become a Group of Seven member. Casson joined excitedly.

Age 29                 Left Rous and Mann and Joined Sampson Matthews as their art director.  He later became their vice president, a position he held until his retirement

Age 30                 Married Margaret.  Has a daughter Margaret.  His father died shortly after his marriage, and he had to take care of and support his widowed mother.
In 1932, JEH MacDonald died and the group disbanded.   The Group of Seven lasted around 11 years

Age 34                  In their wake rose a new group of artists called the Canadian Group of Painters.   Several of the Group of Seven painters were included in the new group
including Lauren Harris,  AJ Casson,  Arthur Lismer,  AY Jackson and Franklin Carmichael.  Their first exhibition of "Nationalist Art" was held in Atlantic City US,
in November 1933.   As active painters and as a group they continued to produce and influence Canadian art.

First shows were with OSA Ontario Society of Artists (Pres. 1941 – 1946).  Well attended with quality artists but few sales.
His first sale was to the National Gallery

Age 46                 In 1942, Casson won first place at a national competition for Victory Bond War posters. He was also one of a number of artists who lobbied the government
to finance the reproduction, in silkscreen format, of Canadian paintings for display at armed forces bases. The purpose of the project was to strengthen morale
by providing soldiers with symbols of home.  A great number of silk-screens were distributed to soldiers overseas.

Age 55                 Finally in 1953, under the auspices of the National Gallery of Canada, eighty-nine silk-screens were offered in a Sampson-Matthews catalogue.
Patricia Ainslie praises Casson's colour prints as "notable for the uncluttered design and fine draughtsmanship”, skills undoubtedly acquired in his years
as a commercial artist.

He died at the age of ninety-four, and is buried alongside 6 other Group members in the cemetery on the McMichael grounds.

Following are notes from the book by Ted Herriott

Casson mandated himself to create a visual record of the many Ontario villages.

Worked hard to be a responsible custodian of the history and reputation of the Group of Seven.

Group of Seven Members at one time or other were

In 1926 the Group of Seven consisted of only six, because of the withdrawal of Frank Johnston and the group turned to Casson in order to re-authenticate its name.  Casson differed from the rest of the group, not only with his late enrolment, but also in the fact that he continued to work as a commercial artist until the age of sixty, when he retired as Vice President and Art Director of Samson-Mathews. Casson's subjects also differ somewhat from those of the rest of the group.   He has never shown much interest in the North Woods landscape of which the others were so fond. His favourite subjects have consistently been rural scenes of Southern Ontario.